The purpose of our foundation is to raise awareness, share the importance of a healthy diet and lifestyle, and raise money for Bladder Cancer research.

I’ve always been a firm believer that life is better when you’re giving.

While furthering my career in the hotel industry, I’ve also been very active in the community. I’m a member of Rotary, involved in industry organizations, and founded a holiday charity where for 25 years I played Santa Claus on Christmas Day at local hospitals. 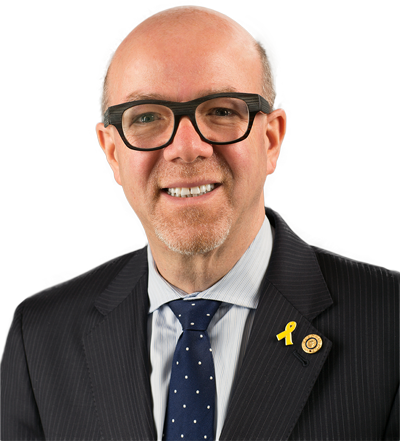 Into bladder cancer, and back again.

My life’s journey, and the story of how the Bladder Cancer Foundation began, all starts in a small resort town in upstate New York. After working my way through college, I returned home and got a job in the hotel industry and subsequently moved around the country, finally settling in Seattle in 1983. I was in my late 50’s in a great relationship and a loving co-parent of our Siberian Husky Mishka. Life was good.

Although I had always had something of a weight issue and the onset of some adult illnesses such as high cholesterol, high blood pressure, and Type 2 diabetes, life was still good and I was invincible. But on August 14, 2013, the good life took a major turn as I learned of my diagnosis of Bladder Cancer!
My current journey started in May, 2013 when I asked my doctor to authorize testing the plaque in my arteries. I had this test done several years prior at a health fair and thought it was time to have this done again.

As my cholesterol levels were in line, my doctor thought the test was not necessary, but I pressed the issue and the test was ordered. When the test results came back, my doctor advised me that within my age and gender bracket, I was at the 80% rate meaning only 20% of the people within this range was worse than I was. Yikes! So, I asked my doctor what I could do to reduce this rate and he suggested going Vegan!
That was it!

I became an immediate full-fledged Vegan! No eggs, no cheese, no meat, no animal product
whatsoever! I was on a mission!

After this I joined a gym and started working out 30 minutes a day. One day a friend suggested to me that I add some jumping jacks into my regimen, the very next morning I noticed some blood in my urine. I contacted my doctor and he said he would check it when I came in within the week for my quarterly check-up. The doctor took a urine sample and it was quite obvious there was something wrong. A CT scan of the abdomen was ordered and a referral given to see a urologist. I met with the urologist to get the scan, and while I was there he wanted to take a look inside the bladder using a camera scope through the urethra. First, he showed me the healthy skin and then there was a tumor! A cancerous tumor! Whoa!

The very first thought in my head was that I was not immortal!

I needed surgery to have the tumor removed and test the surrounding cells to see if it had invaded the muscle. The doctor recommended a plant based diet which I had started on my own just three months prior. I believe now that had I not gotten the diagnosis of my cancer, I likely would not have stuck through the change to being vegan, and the outcome might have been much different.

The surgery was successful with the tumor removal, but they found what looked like lesions on several sections of the bladder lining. Tissue samples were sent to pathology. When I saw my doctor for the follow-up, the good news was that there was no cancer in the muscle, but there was a high-grade, aggressive cancer in the lining.

The initial treatment started to be followed by another biopsy in 6 weeks. There was a 50/50 chance this treatment would work, this was an aggressive cancer, there was also a high probability that it could reoccur in the future. A bit later I was referred to the Seattle Cancer Care alliance just to have a second set of eyes on the situation, and was informed there was a 65% chance the cancer could reoccur within five years, even if the first series of treatment was successful.

The doctor shared the different options if the treatments were not successful, including removing the bladder and having to wear an attached external bag or having a new bladder using reconstructive surgery with portions of the intestines. My doctor recommended the bladder removal option as it was simpler with less future complications. I made the decision to switch my care to this doctor.

The remaining treatments went well and I was scheduled for the follow-up biopsy surgery on Tuesday, December 10, 2013. The surgery went well and tissue samples were taken. I would just need to wait to hear back from the doctor for the pathology report to come back. The next day I answered my phone and the voice on the other end simply stated “NO CANCER”! I thought it was a friend calling but then realized it was my doctor.

Oh My God! Cancer Free! …At least for now! What an emotional high! Who could have asked for a
better present during the holidays?!

So one might ask, what’s the secret to my success? There were at least four factors.

Receiving the positive support and love of my partner, colleagues, friends and family.

Going vegan three months prior to the diagnosis set me up for a healthy body. To date I have lost 50 pounds and look and feel great! As an aside, going Vegan significantly lowered my cholesterol from 159 to 124 and as a Type 2 Diabetic, my A1C level dropped from 7.1 to 5.6, on the cusp of not being diabetic!

Keeping a very positive attitude with a good sense of humor, a non-diminished effort at work, and the ability to share with others my disease so that I did not have it bottled up inside.

Having a very knowledgeable, capable and caring doctor and staff.

Now for the next step.

My life has been forever changed from this experience. From a young child, I have always believed in the importance of giving back to the community. Life is a circle, and although I have given back to my community over the years, I have now been on the receiving end of caring and support from many that are in my life.

In searching for a way to share my journey and to continue to give back to my community, my partner and I chose to start the Bladder Cancer Foundation. There are many large and valued foundations for other cancers, but Bladder Cancer is not known by many.

Through the assistance of my doctor, who has accepted my invitation to serve on the foundation board, I contacted the University of Washington Medical Center’s Philanthropy department to determine what were the best areas for research funding.

I learned that urologists at UW Medicine had been successful at securing research grants from the National Institutes of Health. However, private support remained (and still does) a critical cornerstone of the department’s success—helping to fund leading-edge discoveries, build technologically advanced clinical spaces, and pursue new ideas not supported by existing national grants. We welcome your partnership in advancing research and treatment for patients with bladder cancer.

Returns on individual donations can be substantial. Even small gifts can result in research outcomes that garner significant funding from national sources. Further, urologic diseases like bladder cancer are widespread and affect millions. Your donation can lead to advances in care that change the lives of millions of men and women not only in the United States, but throughout the world.

It is my hope that from my personal diagnosis of Bladder Cancer, with its positive outcome at this point in time, that we can make inroads into some of the priorities noted above. It is a lifetime goal to be able to leave a lasting remembrance after I am gone, and there would be no greater feeling of accomplishment than to have this foundation remembered as a game changer in bladder cancer research and prevention.

Come Golf With Us!

.
The HJCBCF will soon be holding it’s sixth Annual Golf Tournament on Friday, July 26th at Washington National Golf Club in Auburn. The cost is $125 including green fees, cart rental and dinner. The golf tournament is our largest fundraiser each year. This event is an opportunity to show support by the community through a fund game of golf, have a chance to win some great prizes from many area contributors and, most importantly, break bread over dinner while learning the latest in research and development from the University of Washington’s Urology Department medical staff. Come be part of this exciting event. Tee off at 1:30 PM. For sponsorship details please click HERE. To REGISTER FOR THE EVENT click HERE.